There’s a particular day in 1988 that Jerry and Julie Nelson will never forget, even though Jerry’s unable to recall most of it. This is because July 10th, he says, was the day that he was supposed to die.

On that day, 30-year old Nelson entered the manure pit at his family’s dairy farm near Volga, South Dakota to unclog a slug of hay that plugged the manure pump.

He recounts his story at the 30-year anniversary of his unlikely survival.

A scorching Sunday morning. Rushing through chores on our dairy farm. Glancing into the pit and discovering that the manure pump had plugged. Crap!

But I know how to fix this. Just climb down and unplug the pump with a spud bar. I’ve done it dozens of times.

Bending over with the spud bar in my hand, the manure inches from my face. Suddenly feeling really weird. It’s the gas! Get out, NOW!

Beginning the climb up and out. I can see the sky, hear the tractor idling. Then everything abruptly fading to black. I cannot recall much of the next three weeks.

Dad finding me unconscious, floating face-up in the manure. He and Mom placing the 911 call no parent wants to make.

First Responders hauling me out of the pit. No respiration, can’t find a pulse. Ambulance whisking me to a local hospital.

My wife, who was in town for groceries, a car suddenly pulling up alongside hers. Its driver, a First Responder, shouting, “Get to the hospital! He’s still breathing!”

At the ER, the attending physician telling my family that I’ve inhaled hydrogen sulfide. Zero chance for survival.

Julie absorbing that at age 29 she’s about to become a widow with two young sons. Keeping her wits about her and asking the doctor if I’m still alive. Yes. Barely.

Then call the chopper. Get him to Sioux Falls. Doctor replying, you don’t understand. There’s no hope. My wife saying, I don’t care. Call. The. Chopper. 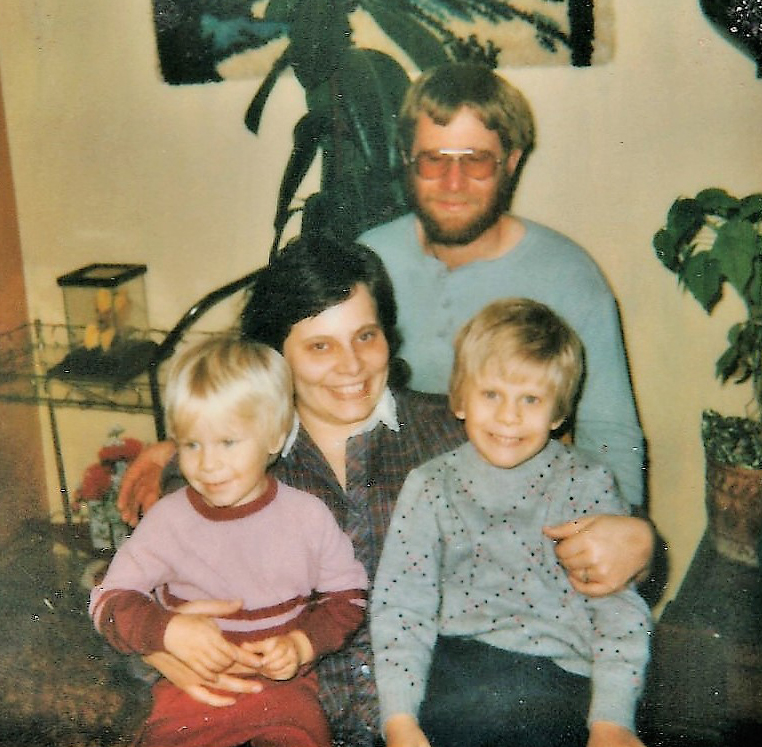 Nelson’s diagnosis at Sioux Falls included a collapsed right lung, diffuse pulmonary infiltrates, manure aspiration, and anoxic encephalopathy. His odds of survival, family was told, were perhaps 50/50 – if he made it through the first week.

ARDS – acute respiratory distress syndrome – becoming part of my family’s lexicon. My wife, who never leaves my side, giving me a sponge bath and being assailed by the stench of rotten eggs. Hydrogen sulfide is sweating its way out.

On the seventh day, me indicating to Julie that I can’t breathe despite being intubated and on a respirator. Doctors being summoned. Diagnosis: my swelling lungs are suffocating themselves. Nothing more can be done. Call the family. This is it.

My wife again refusing to give up, asking the doctor to consult with Mayo Clinic. He does and is advised to inspect my lungs with a bronchoscope. Discovering that blood clots are blocking major airways. The plugs are removed and I can breathe again.

From my point of view: the first three weeks following the accident are a blur of fantastic hallucinations and painful realities. I don’t know which is which.

Gradually being weaned off the narcotics as my pulmonary function improves. Clear thinking returning slowly. 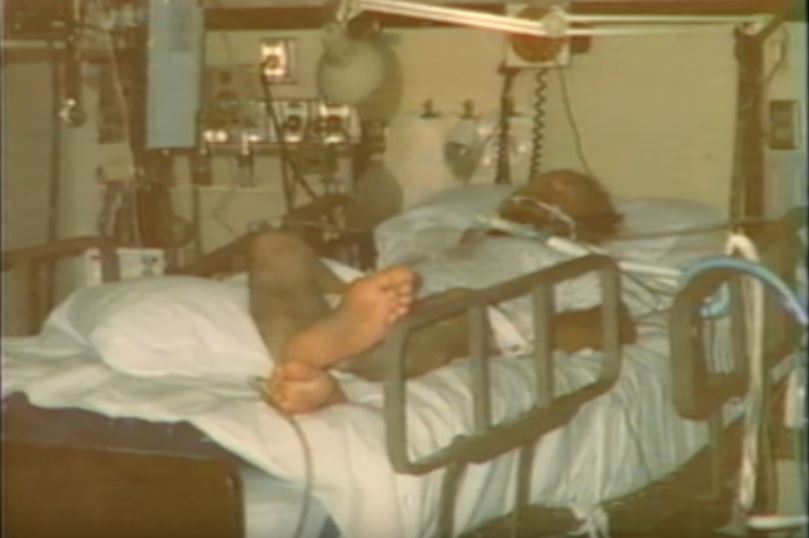 I’m in a hospital bed. I am catheterized and am breathing through a tube protruding from the base of my throat. A forest of IV poles sitting at my bedside and my right ribcage aching. Inspection reveals stitches where chest tubes had been.

I don’t belong here! I have farming to do, cows to milk. Trying to exit the bed and the respirator emitting earsplitting whoops. A nurse sprinting into the room, reattaching the respirator to my tracheotomy tube. The nurse admonishing, “You be good! You want me to tie you down again?”

Then, slow but steady improvement. It’s a big deal being hoisted from the bed and placed in a recliner. Sitting upright for the first time in a month leaves me feeling woozy.

The urinary catheter and pulmonary artery catheter being removed. Relearning how to walk in Physical Therapy. My wife ordering in a Godfather’s Classic Combo pizza. I can only manage one slice, but it’s the best meal I’ve ever had.

Coming home to a huge Welcome Home banner, family, cake and hugs. Just like a birthday party. Which, in a way, it was.

Nelson credits his long-shot survival to many:

His parents had the presence of mind to open a second hatch to the pit and use a window fan to blow in fresh air until emergency responders arrived; had they entered, they, too would likely have been victims. Rescuers wearing air-supplying respirators retrieved him. A diverse team of Sioux Falls specialists managed his care and recovery over a five-week hospital stay.

And Julie, who, he says, refused to give up on him.

During Jerry’s 25 days in ICU, she brought their sons to see him, not knowing which might be the last time. Six-year-old Paul busied himself by trying to explain the functions of all the machinery hooked up to his dad. Chris, age 4, stood at the bedside and patted his hand.

Julie taped photos of the boys to the ceiling above his bed - so they’d be the first thing Jerry saw when he came to - and dozens of get well cards to the wall, many from people they didn’t know.

“You share your stories, pray for one another, and cry together when the news isn’t good.” 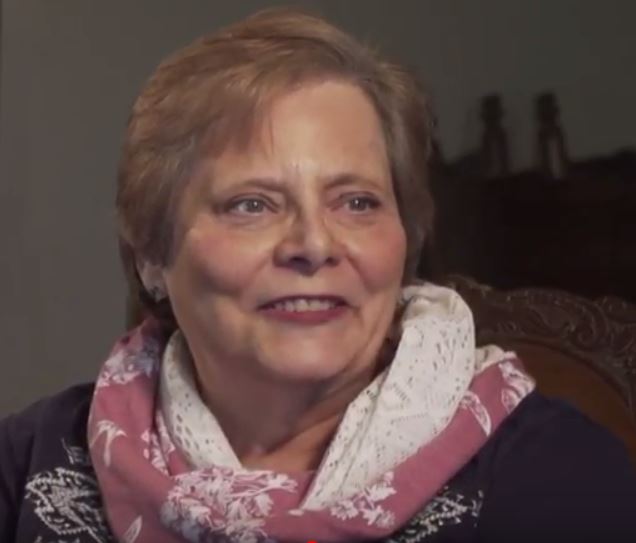 After he returned home that fall, neighbors and friends convened – in the old tradition of close rural communities - to help the Nelsons with harvest. 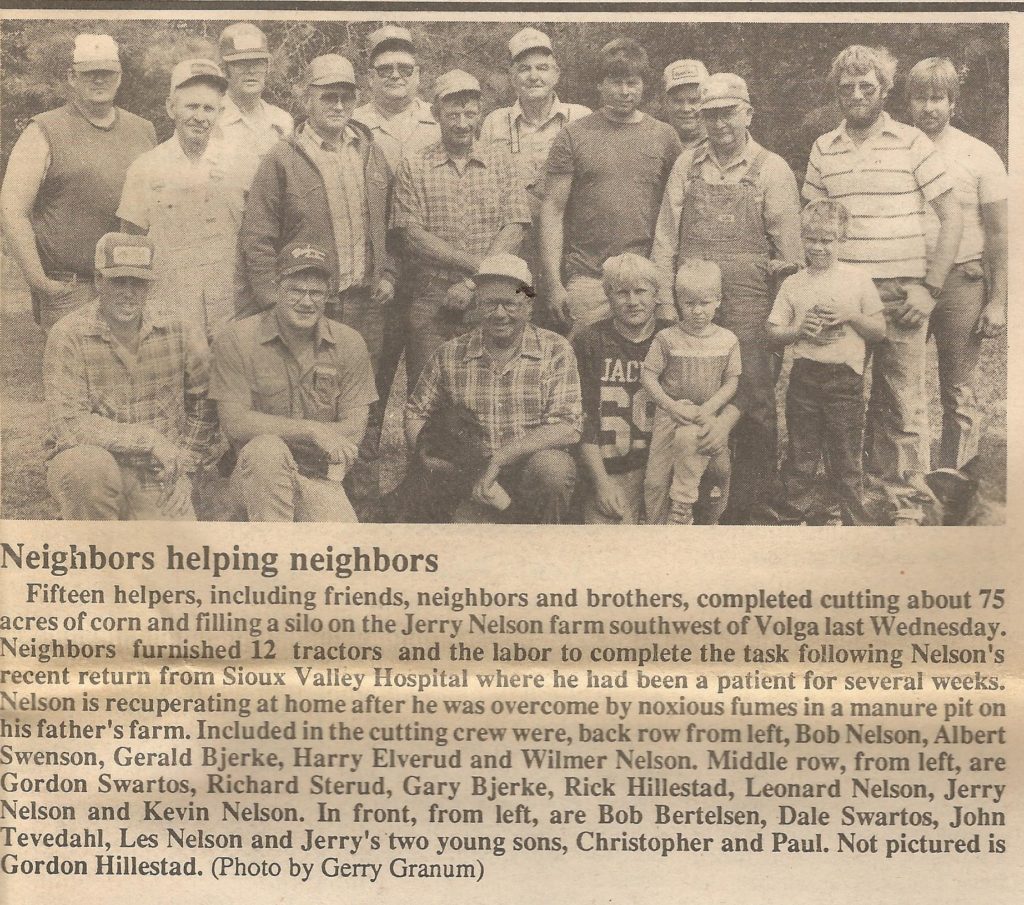 He remembers encountering the pit upon being able to resume work and the major operational change they made to ensure safety.

I recall pushing manure into the pit for the first time afterward and getting the feeling you get when you peer over the edge while standing atop of a tall skyscraper. But work needed to be done, so I set it aside and carried on.

[After the accident] when the pump plugged, we’d go through the rigmarole of pulling it out with our loader tractor to unplug it. We began to grind our hay and our bedding, which pretty much eliminated the plugging issue. 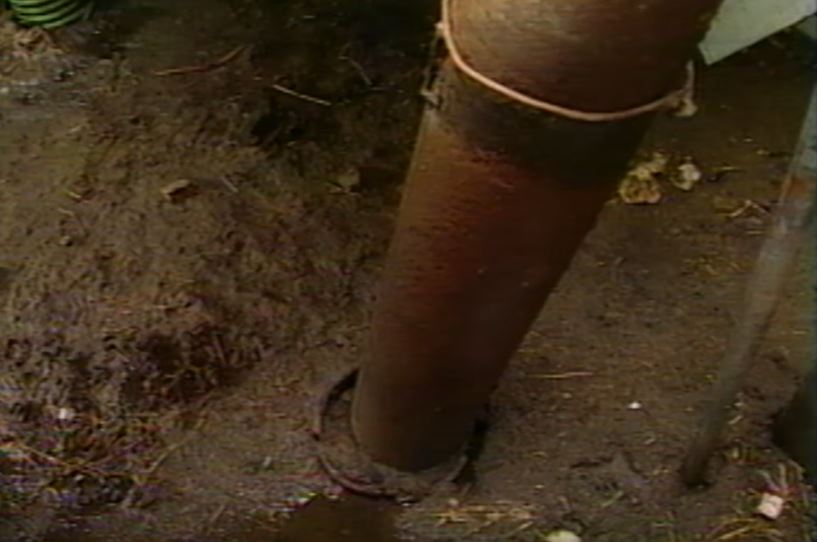 Shortly after, I could look down into the pit with total dispassion - and a sense of wonder that I had survived.

Twenty-nine years later, the Nelsons were waiting at the bar of a restaurant to meet a friend when they bumped into a memory. Julie glanced across the restaurant. “Oh my gosh! There’s somebody we know!”

It had been 29 years since I’d seen Dr. Hoffman. Which, I suppose, is a good thing. At the Sioux Falls hospital, most in that team of doctors  assembled to manage my care had “ist” attached to their titles, such as 'pulmonologist.' It’s easier to simply say that I had a lung guy, a gut guy, a brain guy, and numerous other specialists. Dr. Hoffman was my infectious disease guy.

Shortly after I'd arrived at the hospital, Dr. Hoffman had wanted to know what sort of microbes were present in our manure pit. He cultured a manure sample and found that the answer was “about everything imaginable.” He had visited me daily in the ICU. He was kind, concerned, and always asked, “How are you feeling, Mr. Nelson?”

“You should go say hi to him,” urged my wife.

I walked over to the good doctor and introduced myself. I asked if he remembered me and he replied, “Of course! Hydrogen sulfide exposure in a manure pit. What year was that? 1988?”

Once again, he smiled kindly and asked, “How are you feeling, Mr. Nelson?”

I apologized for letting nearly three decades elapse without giving him an update, and I thanked him again for everything he had done.

As I was taking my leave, Dr. Hoffman asked, “Would you mind if I pulled your chart and reviewed it? I have an infectious disease conference coming up and I think your story would be a fascinating one to be presented.

“Yours was a very difficult and interesting case,” he said. “It was certainly memorable. I’m glad that you turned out so well.”

Hindsight and wisdom often come as partners after a close call, with an urgency that doesn’t diminish over time.  Nelson brings all three to the message he shares with others:

If I can get someone out there to just think twice before they rush to do “this thing” – whatever it may be – those few seconds of hesitation and thought might save you from something like I suffered.

Thirty years on, I’m grateful for every day above ground. 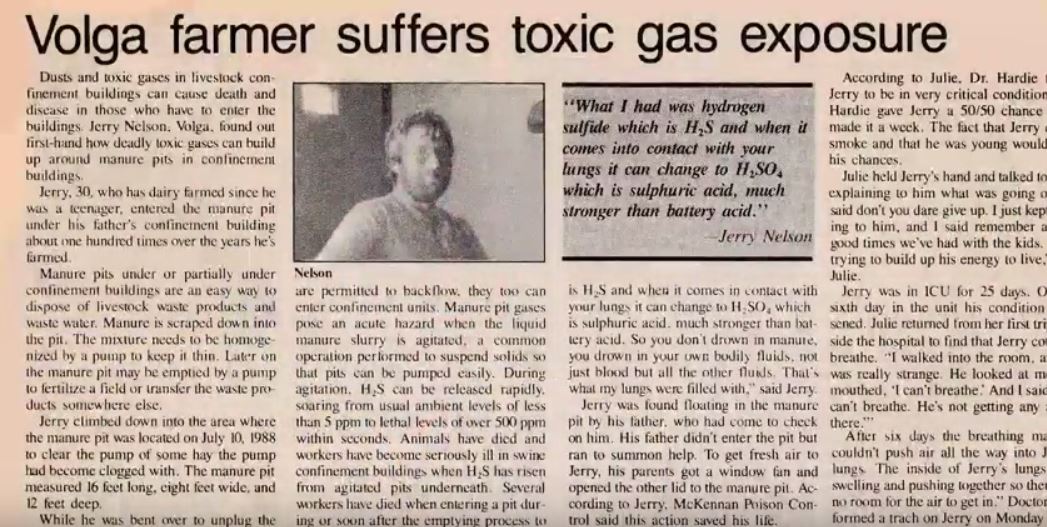 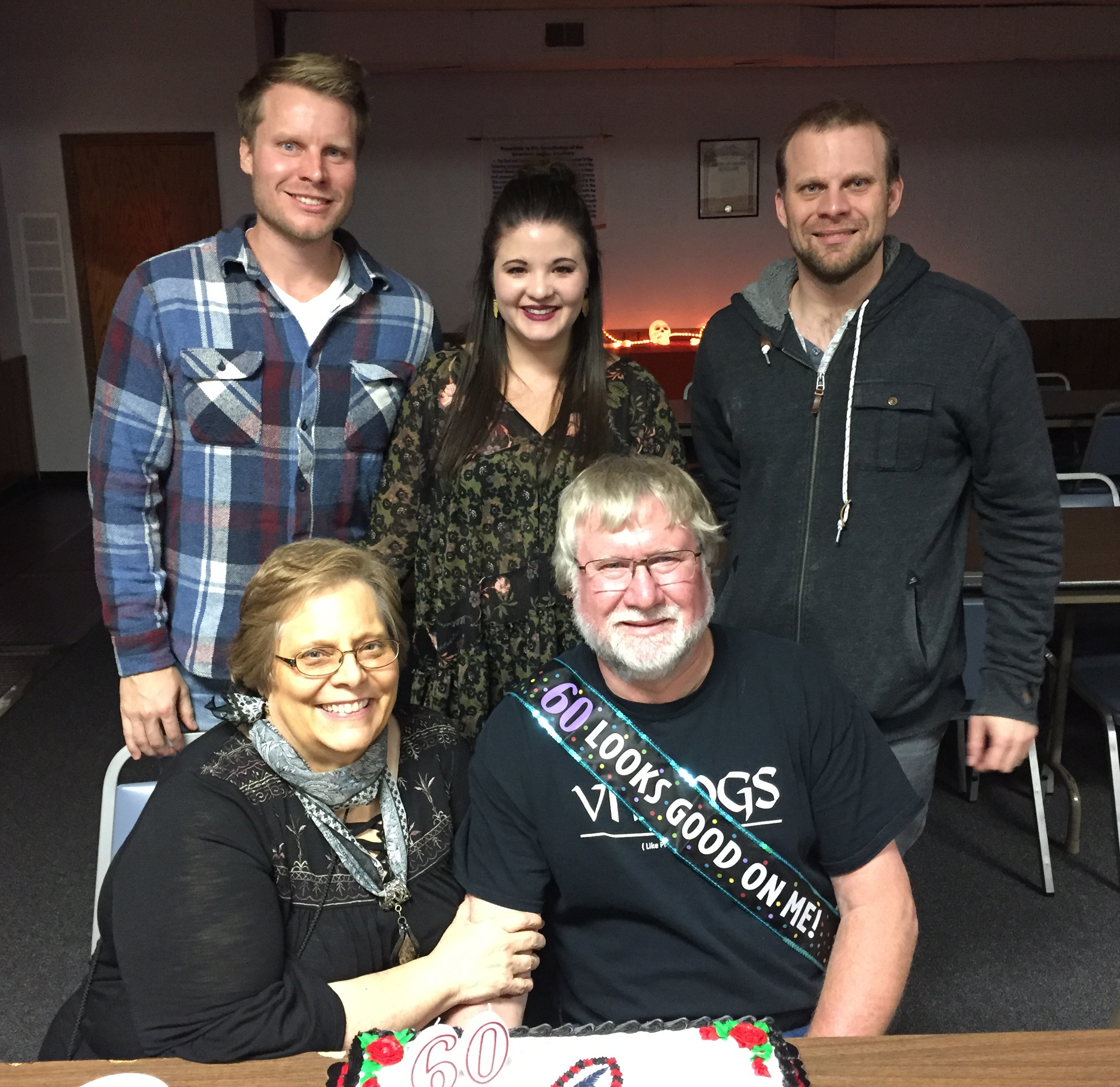 Video courtesy of SDPB's On Call with the Prairie Doc®

An abbreviated version of this story was published in Iowa Farmer Today.

Nelson has written about this and other farm experiences in Dear County Agent Guy, available at bookstores and workman.com.